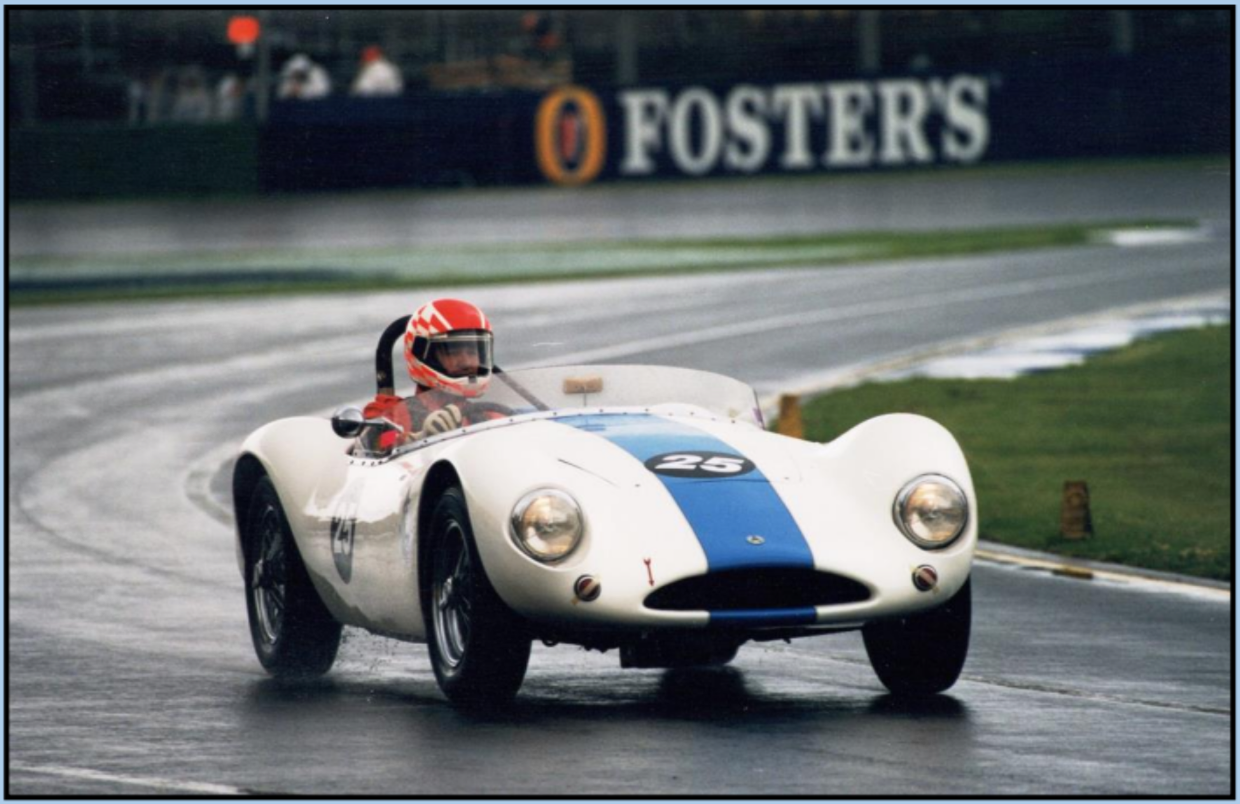 A Timeline of the History of the Ausca MG and Some of the People involved in its journey.

The Ausca MG started out as an MGA 1500 and was bought new in 1956 by Augustine (Gus) Mercurio of Ballarat Victoria. Gus a boxer and Chiropodist moved to Australia from the United States in 1956 after coming over to view the Olympics in Melbourne. He decided to stay and run a practice out of Ballarat. Later he became an actor in the film & television industry, and boxing commentary on television. Gus, after some normal street use started to race his MGA, however in his first hill climb on gravel forestry roads in the Creswick area he rolled it with the body work receiving the brunt of the damage ,and Gus reputedly uninjured.

Straight after this the car was sent to Harry Firth to be modified and lightened for circuit racing. The Mercurio MG being one of many early private customers of Harry’s all while he motor raced and rallied. Harry helped to prepare the 1948 AGP winning BMW328, he raced/hill climbed a 356 Porsche, and just some of his other accolades include winning the Australian Alpine Rally five times along with the Southern Cross Rally, raced his own supercharged MG TC special, he teamed up with Bob Jane in a Mercedes to win at Phillip Island in 1961 for one of his two wins there, followed by three more wins at Bathurst the last in 1967 in an XR GT Falcon, contested the ATCC in his Ford Cortina, and the Ampol Round Australia Rally, as well as fielding a team of three Ford XT GT’s in the 1968 London to Sydney Marathon finishing 3rd, 6th & 8th while then being an influential team manager with the first Ford works team and then with the Holden Dealer Team well into the 1970’s. After Harry
modified the car, it ran in another Creswick Hill Climb in Chassis form before the new fiberglass body was ready.

The body was made out of the mold by Paul England and his work colleagues, Dino Mattea included, who designed it with Paul from photos of a 1953 Maserati A6GCS. It was supplied to Harry Firth by Paul England off his original Ausca that is powered by a Holden grey motor with the very first Repco “Hi-Power” head. Paul England, a talented engineer worked for Repco research and development, before starting his own engineering business that still runs to this day by his family. He was an international racing driver having raced his Ausca extensively in New South Wales, Victoria, and New Zealand from 1955 through until 1958, also in 1957 in a F2 type 41 Cooper Climax in the F1 German Grand Prix. Later in the 60’s building a Can Am style Ausca Special as another design. One of his other great achievements was in winning three
Australian Hill Climb Championships in yet another Ausca Special, his first at Mount Cotton QLD in 1970 and his second and third in 1973 and 1974 with the all wheel drive open wheeled Ausca twin VW engined, supercharged Hill Climb Special. To reflect his heritage Gus had the body refinished with the blue stripe on white which are the American racing colours. It was finished and registered GY-H396 in 1959 and believed to be the fourth body made. The second being fitted to the original Ausca after a nasty rollover and the third to the Jim Gullen Supercharged MGK3. There after the two MG’s being displayed at the Light Car Club of Victoria on an occasion. Somewhere between 7 and 14 Ausca bodies
were produced depending on who you talk to, they included one with Ford Zephyr running gear (Zephsca special), a few with Austin Healey, Triumph, Holden (Bacchus special), and MG.

Gus approached Bill Clemens of Clemens Sportscars of Chadstone to share the driving and maintain it. Bill having previously raced Jaguars in the 1950’s, and an Austin Healey in the 1956 Australian Grand Prix around Albert Park Lake and in the first Armstrong 500 at Phillip Island {the forerunner to Bathurst} in 1960 being part of a team with a Hillman Minx to name a few.

He went on to further modify the MG over time increasing the engine capacity to 1700cc among other improvements. At the end of his racing phase around 1961 Mercurio traded the MG on a new Holden at Reg Hunt Motors of Elsternwick. Sitting on the showroom floor for a time at the considerable price of 1,100 pounds when a new MGA went for 1,200 pounds with full weather equipment which the Ausca didn’t have.

The car was purchased by Dale Johnson for around that price but shortly after bought by Bill Peacock, the owner of a soft drink company who mainly used the MG for road use, then later modified the bodywork in 1965 with enclosed headlights, extended nose treatment, flared wheel arches, 6” wide wire wheels and a head fairing not unlike a D Type Jaguar. Around this time Bill, had good friend and racing driver Richard
(Dick) Sorensen test and race it at Calder Raceway on one occasion to see if the performance and modifications came together, and by all accounts the little MG passed with flying colours.

Bill Peacock also got to know George Makin quite well after dropping into his petrol & service station before George, his brother Percy, and Barney Luby became partners in Makin and Luby Motors dealership in Heidelburg West, the pair became good friends and went on many a blast through the Dandenong Hills in their sports cars, George had them all over the years from his famous yellow racing MG TC “Buttercup” to Elfin, Lotus, and E Type Jaguars & many MG’s to name a few.

George Makin purchased the Ausca in 1973 and raced it regularly in historic events until Easter 1991 at circuits across Victoria, South Australia, and New South Wales such as Phillip Island, Winton, Sandown, Calder, Amaroo, Oran Park, AIR, and Hill Climb venues Collingrove, and Templstowe. Being very enthusiastic about his motor racing George would often loan the Ausca to close friends to drive to and from a circuit or
race it while George raced his Elfin Clubman at the same meeting, a very generous man indeed. George had the car rebuilt in 1987, stiffening the chassis and returning the bodywork back to mainly original specs, apart from the extended front and headlight treatment. He also had Don Ballingall, owner of the fastest MGA in Australia at the time supply an original 1600 block that is now enlarged to 1650cc.

The MG in its current form also has Jaguar 1 3⁄4” SU carburetors, a Supersprint cam, Kent double valve springs, adjustable original style shock absorbers and a factory straight cut gearbox and a limited slip diff. My brother Gavin and I attended the National Jaguar Rally in Melbourne at Easter in 1991 where we had arranged to meet up with our friend George Makin, after meeting him the previous year on the Jaguar
World Tour, a car orientated tour visiting factories, museums, historic racing circuits and the like, with people from around Australia, New Zealand and the USA throughout Europe, UK, and the USA.

While looking over George’s home garage in Viewbank at that stage, which at that time consisted of an immaculate Formula Junior Lotus 20 in the BRG/yellow Lotus racing colours, a silver Jaguar V12 E-Type manual roadster, a Riley Imp, and the MG Ausca, George announced that he was thinking of selling the MG. With one of my all time favourite cars being the MGA I couldn’t resist the chance of aquiring this unique MGA with history, a deal was done, and Gavin and I trailered it back to Brisbane after that long weekend.

In 1993 Gavin and I shared the driving while participating in the Historic Demonstration race around the street circuit in Adelaide in one of the support races for the three days leading up to the F1 AGP, and the same again in 2002, myself sharing the drive with my father Tom and with my mother Carolyn along for the ride this time as crew at Albert Park in Melbourne. Locally over the years the Ausca has been driven on the road & at the Mount Cotton Hill Climb and Lakeside Raceway sprint and regularity events, a motorkana, as well as trailered in the Wynnum Pipe Band Parade behind Mum & Dad’s old Morris Minor Ute, participated and displayed at a few QLD MG club Concourse, a few Macleans Bridge outings and on Australia Day at Ormiston among a few other shows, and my youngest daughter Hayley’s school formal.

Being a member of the Bayside Vehicle Restorers Club for a few years now and being asked to contribute a story on the car, I thought it was time to put pen to paper. Looking forward to attending a few more Bayside Club events in the future.

The Ausca is mentioned in two of the late great John Blanden’s excellent publications titled Historic Racing Cars In Australia. 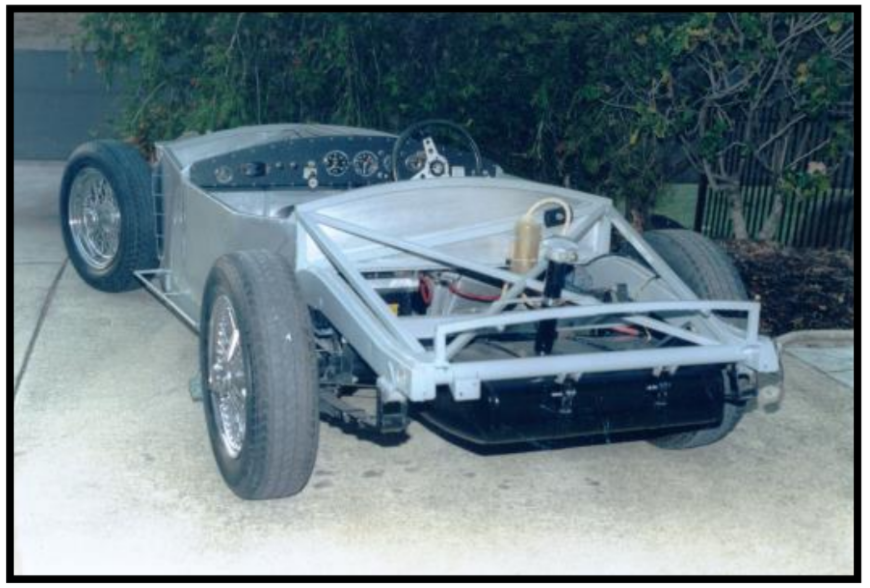 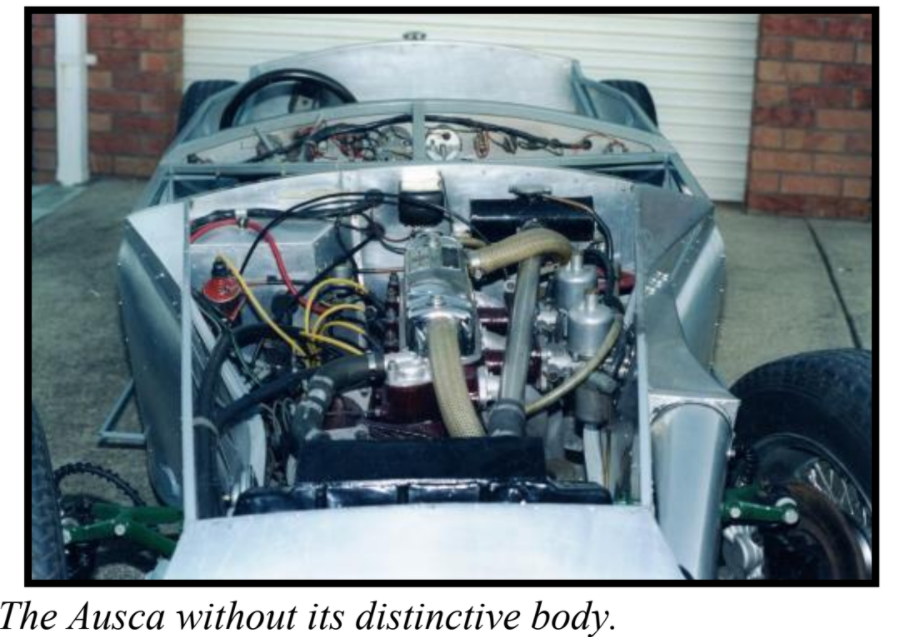 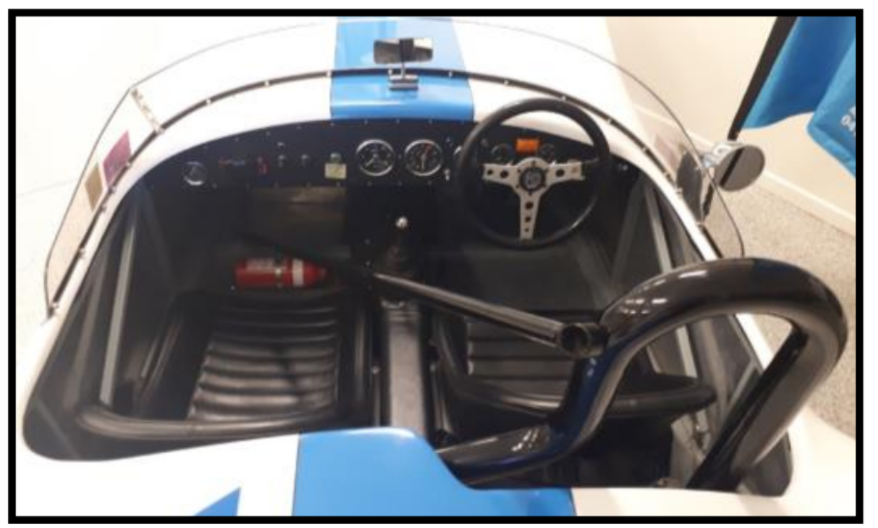