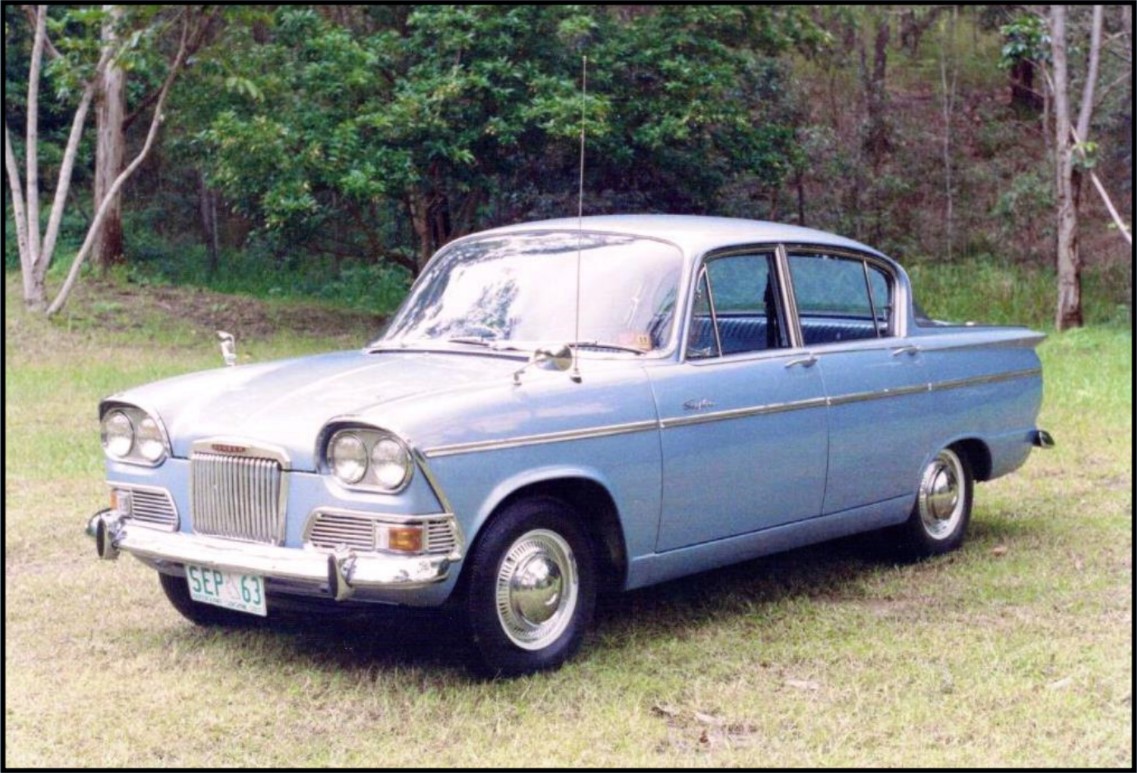 Lawrie and Jean Bennett own this 1963 Mark I Humber Sceptre. This rare sports saloon was a bare shell restoration in 1993, and has since been on many rallies to Darwin, Perth, Melbourne and Canberra, and on two Bay to Birdwood Classics.
The Humber Sceptre was produced by Rootes from 1963 as a luxury four door sports saloon, based on the successful Sunbeam Rapier and Alpine mechanicals.

It was a fast (95mph plus) and economical touring car at a time when English motorways were being introduced. It competed in a niche market which included the MG Magnette and Vauxhall VX4/90. The Sceptre was not exported to Australia: instead Rootes marketed a Humber Vogue Sports with the Sceptre engine, suspension and power brakes, but no overdrive. Only 30 Sceptres are known to have been imported, with three coming to Queensland.
At the 1984 Rally in Dubbo Lawrie met a Sydney club member who had a beautiful Humber Sceptre, and decided that he had to have one. In 1988 he managed to convince this friend to sell him his spare Sceptre, and in 1990 after a six year search found the only surviving Sceptre of the Queensland three at Ormiston.

A total restoration was completed following 18 months of intense work, and in 1996 Lawrie’s efforts were rewarded when he won the Humber Concours Championship in Perth, after which he hung up his polishing rag.
After 27 years and 88,000 miles the Sceptre is still a fun car, fast and economical with its overdrive (37 miles per gallon) and power disc brakes. It lopes along the highways at 60mph plus with ease, and has been driven to Perth, Darwin, three times to South Australia, three to Victoria, as far as Longreach and on numerous interstate and local rallies. It has helped keep up Lawries’s enthusiasm for car clubs and rallies.

In 1994 Lawrie assisted with organizing the National Humber Club’s rally in Mount Tamborine, and then in 2005 organized a National Rootes Group Roundup in Warwick. In 2001 the Sceptre was a lead vehicle in the Centenary of Federation Shannons Tour to Canberra.

In 2007 Lawrie was asked to organize a BVRC trip for the Bay to Birdwood in Adelaide, the largest continually-held motoring event for veteran, vintage and classic vehicles held anywhere in the world. So off went the Sceptre with six other cars for five days of club rallies in South Australia, culminating in the Bay to Birdwood Procession.

During the restoration Jean wrote the following poem, which explains a lot.

The restoration of the Sceptre
In 1988 Lawrie bought his first Sceptre.
He drove it home from Sydney in fog and bad weather,
He put it in a shed and that’s where he kept her.
It went very well and all held together.
Two years later he traced another one,
I thought “this is no fun”
He managed eventually to buy Sceptre Number Two
This meant our three Vogues were reduced to two.

In 1992, the restoration of Sceptre Two began,
Bolt by bolt, gear box, engine and fan
It all came apart and all that was left
Was a bare shell, it looked quite bereft.
Like a giant jigsaw, bits were put on a table,
Wires and hoses, you name it, were given a label.
Sorted and boxed, it was a real operation
It took many hours and lots of frustration.
Eventually it was time to go for painting

It was dragged up the hill by a Vogue without fainting,
And taken away looking sad and scrappy,
But when it came back it looked very snappy.

Even though the bank balance will be somewhat diminished.

Then came the job of putting it together again
Pipes and wires and brackets, what a pain!
All pipes underneath had to be removed of rust,
It took hours of hard work, but was a must.
Eventually it looked like a car once more,
Although things were scattered all over the floor.
For safe keeping the bonnet was put under our bed,
I began to think I had rocks in my head!!
Then the dash was another story, with wire and dials everywhere
Lawrie spent hours and hours, sometimes in despair
Sorting them out, he eventually found
That the wiper motor didn’t go round and round.
This problem was solved, and also the wireless
I must admit Lawrie’s patience is tireless.
On the home stretch now, a battery was bought
Ah! Getting close to the end now, I thought.
Finally the engine and gear box went into place,
I think a pleased look came over my face
Can we please get the bonnet from under the bed, I plead,
Oh no, not yet there’s something else we need.

The bumpers and chrome were all fitted
The instruments all worked and gauges flitted
The bonnet is put where it should be
We must be nearly there, says impatient me.
New spark plugs were purchased and finally fitted
We’ll start her up soon, he finally admitted
I’ll put the seats in first though
So that the trimmer will know how to go.

The first turn of the key and it fired into life
I am so pleased after all the strife
Next day the truck came to take it to the trimmer
When it came back it was a winner
New tyres, a roadworthy, insurance arranged
Pay the registration we must be deranged
Now! Don’t forget that Number One Sceptre
Is still down the back in the shed where he’s kept her.
So please don’t give my husband the inspiration
To do another Humber restoration
Because I still have so many jobs to do
That were put on hold for a Sceptre coloured blue
After all that we are still together
A restoration we have managed to weather
We planned to have lots of fun in our Sceptre
And I hoped I wouldn’t end up in the shed “where he kept her.”

In 1996 in the month of September
We had a holiday we’ll always remember
We drove to Sydney and boarded the Indian Pacific
With three Humbers on the train, the trip was terrific
We went to Perth for our national rally,
And made some new friends to add to our tally
We even won the Grand Champion’s prize
Much to our delight and surprise.

We then had a tour of Western Australia
The wind and the rain didn’t mean it was a failure.
Across the Nullarbor we drove that little car,
A trip which to many would seem too far.
Through rain and storms we kept on going
With another Sceptre following behind,
Those two Sceptres they were not slowing
Those little cars were two of a kind.
In 1997 we made another trip
To Longreach and places out west
We had a wonderful time with ten other classic cars
And they all behaved their best.
And then in July to Darwin we trekked
We really had a ball
Our Darwin friends gave us such a welcome
And a good time was had by all.
The Sceptre it went like a little beauty
And many a glance it drew
As we visited many destinations
At towns that we went through.
Travelling is something we enjoy
And as long as our health will permit
We’ll keep on going to many places
If our Humber Sceptre doesn’t quit.
So then in 1998 we went to Wangaratta
We went to meet old friends and new
And there was certainly plenty of chatter
We’ll take back home stories tall and true
Of things that were said and done
Because when you come to a Humber rally
There is always lots of fun.

So far we’ve had a really great time
As we were sure we would,
We’ve ate and talked and laughed a lot
And the company was really good.
So as you can see when all is said and done
We really do have lots of fun
I haven’t ended up in the “shed where he kept her”
I just tag along and ride in the Sceptre.