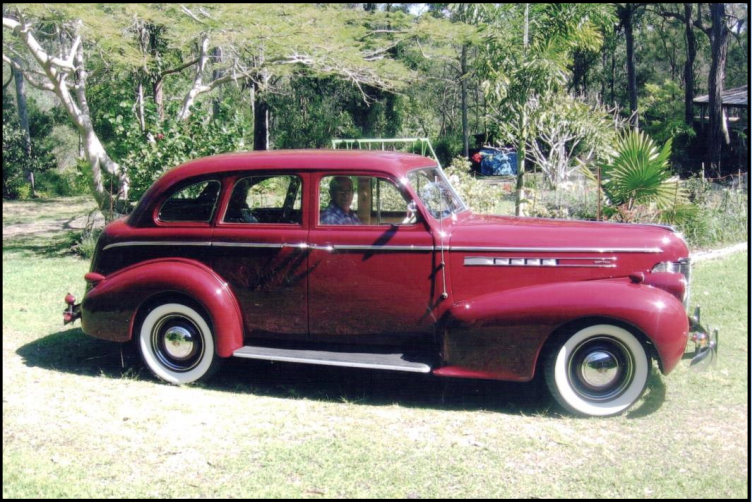 From 1939 to 1948 the Series 60 was Oldsmobile’s entry-level model in the US market. While its trim level reflected its position in the General Motors hierarchy (more prestigious than Chevrolet and Pontiac, but not up to Buick standards), it shared body shape and some components with these brands and with Vauxhall.
In the US the 1939 Series 60 came as a business coupe (with no rear seat), a club coupe (rear foldaway jump seats), a two-door sedan with a full rear seat and a four-door sedan. It had a 2.92m wheelbase and a 3.5 litre inline sidevalve six developing 90hp (67kW). Transmission was “safety automatic”: the clutch was used on takeoff, thereafter the transmission shifted automatically. It also featured a coil spring rear suspension.
In Australia GM-H offered locally-built sedan, sloper coupe and sports roadster bodies, with the latter two now being rare.

I first saw the 1939 maroon Series 60 pictured here while browsing the classic cars section of eBay. It needed mechanical work, according to the ad, and the owner was asking $6,800. When I mentioned the ad to Leona she produced an old photo of her dad, Noel, standing alongside a 1939 Olds. “Dad had one just like that as his first car, same colour too!” she said. I had only recently completed restoring the Commer and was out of funds and energy for another, but I had no answer to Leona’s enthusiasm. We’d look at the car, but she would have to buy it!

The car was in Byron Bay, and though it was 9:30pm I rang immediately, and we arranged to see it next morning. “You had better hook up the car trailer and bring the big tool box”, said Leona. She was taking her money jar. Next morning in Byron Bay Craig, the owner, showed us the car. The engine was partially dismantled, with head, manifold, and other parts in the boot. Otherwise the car had a few dings, some light rust along both turret edges, corners of the body and the front apron under the bumper. The interior was good and, importantly, every piece of chrome – all badges, hubcaps etc – was there.
Craig told us that the engine had started missing, the miss got worse over time, and eventually the car failed to start at all. It had to be towed, and the mechanic at the local servo had removed the head and declared the engine “dead” and in need of a $4,000 to $5,000 rebuild. Craig couldn’t afford this and decided to sell it. He pointed out a scratch on number five cylinder bore, allegedly a cause of the engine’s demise. I noticed light rusting and a bit of water in a couple of bores, but the engine turned freely. There was no lip on the bores and the piston tops showed light deposits of carbon, but everything was otherwise clean. Craig offered to include a pile of spare parts, some original advertisements and an owner’s handbook for the glovebox.
We agreed on a price and, after a trip into town for a bank cheque, Leona and I loaded her new car onto the trailer for an uneventful trip home. The following morning I looked more closely at the engine, the 216 cubic inch sidevalve common to Buicks, Pontiacs and Oldsmobiles of the era.

On cylinders four, five and six I noticed that the exhaust valves were sitting up off their seats. There was no carbon build-up on the valve seats, and on wiping the tops of the pistons they looked newish. To cut a long story short, I freed up the three stuck exhaust valves, cleaned up the bores, coated the original head gasket with Hylomar sealant, refitted the head and manifold, and started it up. No knocks, good oil pressure, and a sweet running engine. This meant great luck for us, but bad luck for Craig because of the garage’s shabby diagnosis. But just to be sure we now run a lead replacement additive to ensure the valves remain free.

A 12 month restoration of the body and mechanicals followed.

I stripped the vehicle to bare metal and etch primed each panel following repairs. I used a local refinisher for painting. While I had used acrylic in the past, we decided on a quality two-pack finish this time, and are very pleased with the result. One challenge was reproducing the red enamel infill on the rechromed badges and hubcaps. I’d envied the sharp eyes and steady hand of our daughter-in-law Yasmin when doing her nails, so I asked her to help paint the red infill enamel. This entailed applying a coat of etch primer then two coats of red enamel to the recessed sections to reproduce the factory finish. It took Yasmin all of Easter 2013 and the week following, but the results were as good as or even better than her exquisite nails. Thanks again, Yasmin.

With painting and upholstery done to a high standard and the brightwork rechromed and fitted the car looked amazing. Since registering the Oldsmobile in August 2013 we have enjoyed many runs and events and hope to continue to do so. 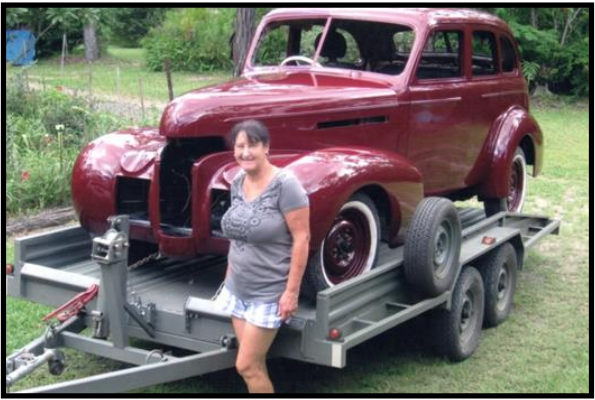 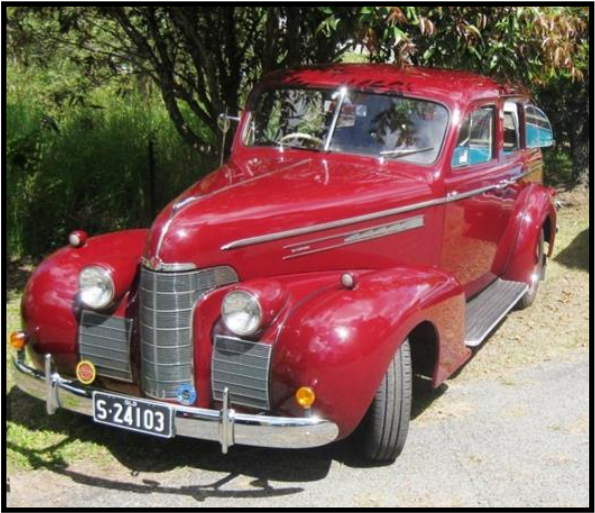 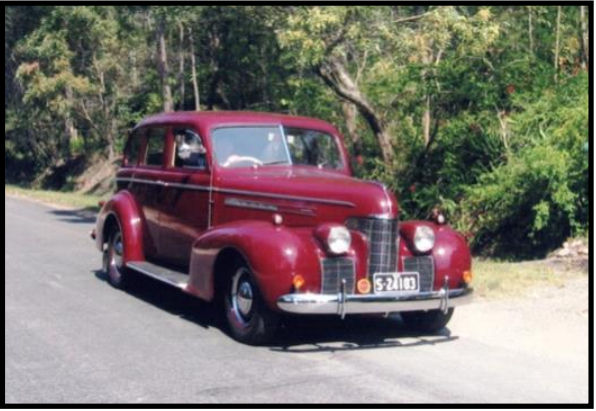 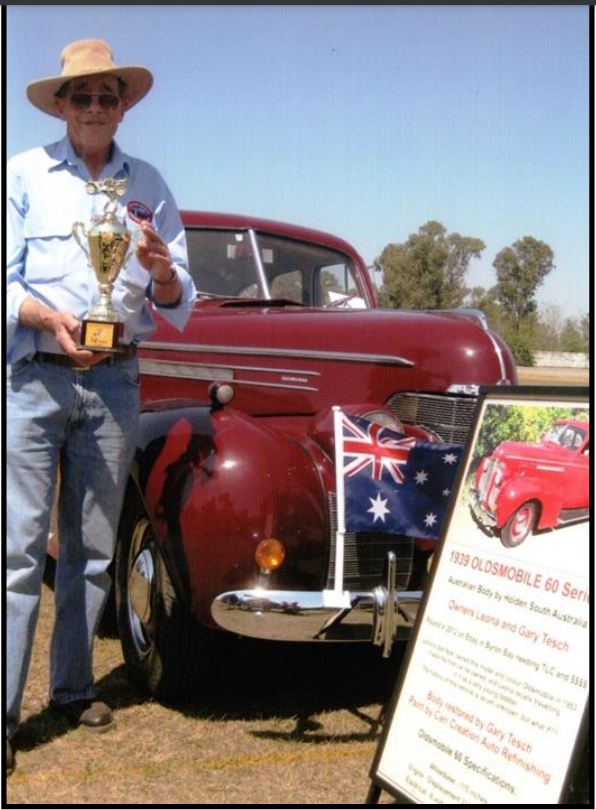